CBS Studios has expanded its international co-production slate to include projects Gold Diggers in Australia, and Electric Years in Spain and France.

Gold Diggers is produced by CBS Studios with The Alliance (a joint venture between Stampede Ventures and Kojo Studios) for Australia’s ABC network. It is set during the 1850s Gold Rush when thousands of men from around the world flock to Australia to hit the jackpot. Heavy-drinking sociopath Gert, and her sister, dummy Marigold, are willing to do anything to find a rich husband; but first they must suffer the lads, lice and lechery of outback Australia. Jack Yabsley serves as writer.

In Electric Years, Campano, a mysterious fugitive hiding near the French/Spanish border, turns a group of artists into sophisticated art thieves. Campano and his gang must stay one step ahead of law enforcement, Europe’s changing tides and a burgeoning Spanish drug cartel. Produced by Dynamo in association with CBS Studios, the show is created by Fernando Navarro and Cristian Conti, directed by Kike Maillo, and written by Navarro, Conti, Isabel Peña, Rafael Cobos and Salvador Perpiñá.

The two series are distributed internationally outside of their local regions by Paramount Global Content Distribution. 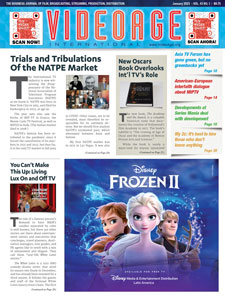