At NATPE 2017, the 38th edition of the annual market (and the sixth in Miami Beach), NATPE’s two-year fight to eliminate or simply reduce the number of people attending the market without buying a registration badge intensified.

The sofas and coffee tables at the Fontainebleau rotunda were nowhere to be found during the day (they returned at night) and guards were guarding the bar area to prevent people without badges to conduct business.

Tables and chairs were also eliminated from the bar at the pool area (another spot where people without badges would sit for hours to meet prospective buyers). However, the “badgeless” meetings moved to the hotel’s indoor and outdoor restaurants instead.

The first day of the market was characteristically busy, with the market floor, and the four suite towers buzzing.

Telemundo Internacional did it again with lavish screenings, a red carpet and party after. It all started at the Eden Roc Hotel with a Hollywood-style presentation hosted by TI’s boss Marcos Santana, and continued till the wee hours of the night at Fontainebleau’s LIV nightclub with all TI’s stars also present.

David Ellender of Sonar Entertainment, said that despite the fact that NATPE continues to be “a Latin American market, I’m [pleasantly] suprised at the European buyers that are returning,” pointing specifically to Scandinavia, France and Germany as well as OTT streaming platforms from all over the world. Ellender said he was glad to have made time to attend two sessions on Tuesday, January 17 the opening day of the three-day market — one which featured a representative from Hulu, the other from Amazon — both, he said “were well attended and informative.”

All sessions were held at the Eden Roc hotel. 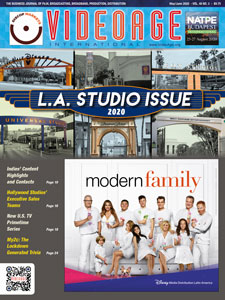